Tonight, I’m hiding out here in my bedroom-turned-office until the week is over.  The reason? this week we did two things: 1- took my son off his ADHD meds and 2-cut him off his video games.

Don’t get me wrong, I am fully supportive of medications, I take them myself.  But we were having some issues and we weren’t sure if we were over- or under- medicating, or if we had the wrong med for my son.  I couldn’t actually remember anymore what he was like “off meds”.  So, in true ADHD fashion, with support from our pediatrician, we stopped meds. Out of respect for my son (future employer reading this!) I won’t go into details.  But one of the first things I noticed blooming in the chaos was his creativity and imagination.

He likes a really weird game on Roblox. One bored day, I suggested he make his favorite video games into board games.  The result was three different versions of an elaborate game involving a predatory pig and an escape-room style board play that would rival any of the board games we play as a family.  In fact, we played it for family game night.  His older brother even got into it. It was truly a work of art. 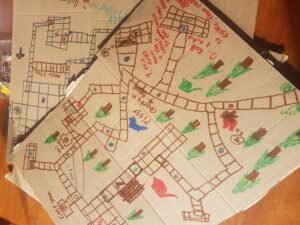 Are kids with ADHD more creative?

Due to the executive function challenges of people with ADHD, I often wondered about its’ impact on creativity.  The literature didn’t seem to have any consistent explanation.  Partially, I think,  because creativity researchers often can’t really agree on what defines “creative”, anyway.

Regardless, I was very interested in a 2020 article on ADHD and creativity in kids (Ten, 2020).  Unlike previous studies that tested ADHDers on medication, this study segmented the kids into ADHD (non medicated), ADHD (medicated) and control (neurotypical, non ADHD kids). The authors reference this “disinhibition” theory of cognitive arousal, which assumes that since people with ADHD are less able to inhibit certain pathways, their thinking brain is less active, which is a condition supportive of divergent creativity.

Should I put ADHD on my resume?

Since we know that creativity is a highly sought after trait in the workplace now, what does this mean for recruitment, or education?  Typically, ADHD has been considered a limitation due to the challenges in organization and motivation.  As an ADHDer and a parent of one, the focus is often on getting “life skills” in place, which often means filling in forms and handing in assignments on time. Talk about creativity killer.

Do you think we will ever see a world where we can expect a person to focus only on their strengths, and absolve them from areas where they struggle?  Then who is going to do the expense reports?  I bet there are people that are good at expense reports, but still don’t want to do them.  What do you think?